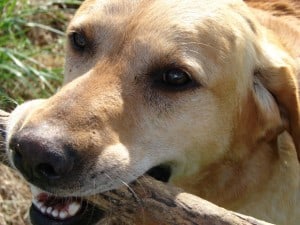 Husband and I knew that we struggled with allergies during the summer…but little did we know that our Golden Lab mix had the same problem. Day after day, Charley snuffed and snuffled, his eyes red and bleary. He licked his paws repeatedly, and spent a lot of his day snoozing. (Ok, that last item wasn’t proof. Charley spends a lot of every day sleeping. So does our other Golden Lab, Abby, who was unaffected.)

Then I had to go out of town for a week. While I was gone, Husband went to the office, as usual, and put the dogs in the backyard. They spent most of every day, into the evening, outside. And Charley was miserable. He scratched away his fur not only on his muzzle, but long strips on his legs and chest. By the time I returned, Charley looked like a victim from a POW camp, his eyes watering and bare skin patches an angry red.  He looked and felt terrible.

We had to do something – and fast. WebMD estimates that one in seven dogs have some kind of allergy. Most commonly, that reaction shows up on the skin, in the form of irritation or sores. Although dogs can and will show allergies to foods, just like their human masters, they also struggle with the same sesasonal issues many people do: pollen, mold, and that all-time winner: weeds. (More here about the subject.)

We’d been doing our first line of defense all summer: allergy pills. Our vet recommended any of the over-the-counter medicines we used to get ourselves through sneezy periods in the summer: Benadryl, Claritin and so on. We gave these to Charley (doses adjusted to his weight) in a lump of peanut butter. Although they weren’t totally solving the problem, Charley was holding his own.

My guess is that the dogs, Charley included, were spending more time with me indoors than I’d realized. Once Charley was exposed to the allergy-causing elements for many hours a day, they just overwhelmed his system. Our vet agreed. After commiserating with our miserable white-and-red dog, he gave Charley both short-term and long-term steroid shots, plus an antibiotic to clear up the infection Charley had caused by scratching.

Within a few days, the white fur was growing back in, and Charley was acting more like his old self. (He still slept a lot. What’s new.) The steroid shots should get him through the worst of allergy season. And then, like us, he shouldn’t have to deal with it again until next year.

Is your dog scratching, doing excessive licking, sneezing and bleary-eyed? Chances are, they’ve got seasonal allergies, too. Here are some things that help:

I wish I could recommend some kind of soothing lotion, but honestly, neither our vet or the internet were much help. (Dogs lick too much.) I did apply hand lotion to my own hands before massaging, figuring that some of it would be absorbed in Charley’s skin as I rubbed.

In extreme cases, you may have to tie on socks on their legs to minimize scratching, or use the white headgear our daughters refer to as the Cone of Shame.

It won’t be for long — Fall is coming.