Home » Eat This, Not That for Financial Health 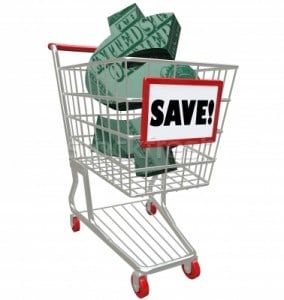 There is a book that seems to get a lot of attention periodically, called Eat This Not That

. The book provides comparisons of restaurant foods that you think of as healthy but really aren’t with foods that actually are healthy. I think the same principle applies to financial health. There are plenty of foods and supermarket items that seem like a good deal, but end up being less than spectacular for your wallet.

When buying ground beef, you may be tempted to buy the cheaper grades, such as the 80% lean. However, it’s 20% fat that gets drained off as grease. When you measure just the meat, the 92% lean ground beef winds up being about the same price per pound as the cheaper stuff.

If your store has a butcher, they will usually take a cut of meat you select and grind it in the back of the store for free. This will be cheaper than pre-packaged selections of ground meats.

Case-packaged refers to the meat in Styrofoam trays. Instead of buying the “fresh” cuts that are out on display on ice, or the bags of frozen meat, the case-packaged meats are usually the best price. Don’t get lured in by the lower sticker price of frozen meat. They are displaying the per pound price for that 3lb bag while you are likely comparing it to the total price listed on the case-packaged stuff.

Those packages of pastas and sauce are often on sale for just $1. Butter and herb seems to be the most popular flavor. Guess what?  They have 10 cents of pasta and a few pennies of dried butter and herbs. Buy dry pasta and make your own for a fraction of the cost.

I’ve touched on seasonings in a previous post. If it comes in a packet, it will almost always be more expensive than buying the individual spices.

Do you have a hankering for popcorn? For the amount of popcorn, microwave popcorn will be cheaper than the bags of pre-popped stuff. Get your nuts from the bulk-foods aisle instead of the cans or jars in the snack foods aisle.

The little single serving cups of ice cream are more expensive then pints. Don’t eat out of the pint jar directly; you’re more likely to eat the whole thing. Instead, dish out your serving into a bowl. Of course, buying the larger containers, such as the quart or the 1-gallon tub, will be even cheaper, but your flavor varieties will be more limited. But I’d definitely recommend buying the largest size container in which your preferred flavor and brand is available.

To learn more about saving money on groceries, check out this post.

His mother's favorite saying is, "if you can read, you can cook." She firmly believes that making simple dishes is not much more difficult than reading the directions on a recipe. His goal is to take the mystery out of cooking and endow everyone with the basic skills needed to cook your own food and save a fortune by not having to dine out all the time.