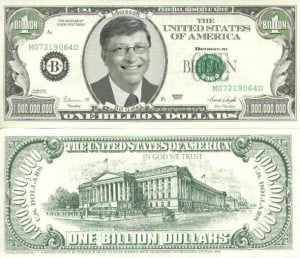 I always enjoy reading Forbes when it releases its current year’s Forbes billionaire List. I especially enjoy the stories of how the people made their money. This year’s edition recently came out and there were some interesting new-comers to the list:

Tory Burch, who is a fashion icon made this year’s list. The company is worth roughly $3 billion (she is worth $1 billion) and Tory is 46, making her one of the youngest on the list.

I’m not a huge fashion person, so while I have heard about Tory Burch, I don’t know much about her. On the other hand, I do know about Nicholas Woodman. He founded GoPro, which is a video camera that attaches to your gear as you are in the great outdoors mountain biking, surfing or kayaking. His company is worth just over $2 billion.

As was the case last year, Carlos Slim is the world’s richest person with $73 billion. In second place is Bill Gates, worth $67 billion and in third place is Amancio Ortega worth $57 billion. Despite adding close to $20 billion to his fortune, Warren Buffett is not in the top three for the first time since 2000.

Interestingly, the “biggest loser” on the list, Eike Batista, fell from seventh place to 100. His fortune is valued at $10.6 billion. He lost over $19 billion last year or $50 million per day. And you thought losing a couple grand in the stock market was bad!

Overall, there are 1,426 billionaires on the Forbes Billionaire List with a total net worth of $5.4 trillion. Put another way, if we steal every penny these people have and pay down the national debt, we would still need to come up with over $10 trillion!

As I mentioned at the beginning, I enjoy reading this list as motivation. Sure, I might not ever become a billionaire, but it is a good motivation in that you never know where a good idea will take you.

The point is, if you have an idea, at least try. Of all of the stories I’ve heard of people starting a business, whether they succeeded or failed, none ever were mad or upset. The only ones that are, are those that never tried and sit around wondering “what if”?