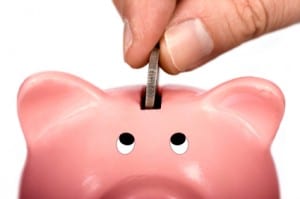 How do you define frugal?  Do you think it means being stingy or cheap?  Is it a way of life or something that is forced on you?  We all have our own definitions of frugal as a word but first, let’s look at a dictionary definition.  From Wiktionary, we find – From Latin frugalis – Avoiding unnecessary expenditure either of money or of anything else which is to be used or consumed; avoiding waste.

I was raised in a fairly frugal family and I often thought of my father as “cheap” when it came to buying some things.  Even though he loved some of the finer things in life and also believed in buying quality over quantity, especially where cars were involved, he would buy the cheapest brand of trash bags and then curse when the thing broke.  There are just some things you need to splurge a little on, especially when it comes to having the garbage break and spread all your dirty ditties all over the driveway at 6am!

So, how do we develop a frugal mindset without slipping into the depths of cheap, miserly or stingy?  It truly is a mindset that needs to be nurtured and expanded.  Being frugal where our food is concerned is making a concerted effort not to waste anything, striving to buy only what we need and seeking out ways to use up what we have.

Frugality in the Kitchen

One area where I struggle is figuring out how to buy the proper amount of food for the best price since my husband has passed away and my two boys are out of the house.  Cooking and shopping for one is downright tough.

Stores like Costco can offer great savings provide you are attune to the prices elsewhere.  However, you need to have the storage space for large quantities and you need to make sure you can use everything before their expiration dates.  Otherwise, you are just wasting money.

Having Ready Made Homemade Meals in the Freezer

As an example of my difficulty cooking for one, I can start out with a small amount of ingredients to make a pot of vegetable soup and end up with a stock pot full after adding all the vegetables.  That’s OK, since I like my own cooking, but I can only eat soup for breakfast, lunch and supper for so long.  So it’s nice to have the extra soup in the freezer, in lunch and supper-sized dishes, for a quick meal when in a hurry.

One way I’ve discovered to reduce waste is to buy spices at the Bulk Barn or from the bulk bins in the grocery stores.  It provides me a way to buy a small amount without having to worry about them losing their aroma before I use them. (You can also make your own seasoning mixes to save money too!)

Buying from the bulk bins is also a good way to purchase things I’d like to try such as quinoa or wheat berries.  This prevents me from having to buy a large package only to learn I don’t really like them.

I will offer a word of caution when buying from bulk bins.  Be sure to shop in stores that are popular where there is a good turnover of product.  If not, you might find stale products, and you may believe that something isn’t as good as it could be if it was fresh.

Use It or Lose Money

A good example of this is the day I had sweet potatoes that were growing little green legs and I was tired of throwing away my money.  How long did I have to work to buy those potatoes and how many other times had I done it?  You spy the sweet potatoes at the grocery and immediately envision hot baked sweet potatoes, dripping hot butter and topped with brown sugar and maple syrup, but forget about them in the pantry.

Later, you see them and they’re starting to sprout bright green shoots indicating their days are numbered.  The amazing meal you thought of while shopping is no longer appealing and you can’t imagine what you could do with them.

Searching the kitchen, you see a few onions that are on their last legs.  You know there are some carrots in the crisper drawer and there’s even a few veggies left from the veggie tray you had earlier in the week.

A Great Side Dish Recipe

Gather all those vegetables, give them a chop and a peel, spread them out on a baking sheet with sides, sprinkle them with some extra virgin olive oil and season with good sea salt, a couple of grinds of pepper and whatever herbs you have on hand.  Toss them into a hot oven (450F) and roast for 15 – 20 minutes, stirring once while roasting.  Serve this as a side to any meat or fish and you have a great meal, full of locked in nutrients.  Best of all, you’ve not thrown away any of your grocery money which is the definition of frugal!

Being Stylish at Home Without Spending a Lot

I have never been one that felt the need to “keep up with the Joneses” and I guess that gave me a head start on frugality.  My eye has always been drawn to shabby chic decorating and my style has always been somewhat eclectic.

I guess this could present a problem for someone who demands Ralph Lauren and Lee Joffa in their homes and might be a hard pill to swallow while embracing change.  But there are ways to embrace a more frugal style in decorating by finding ways to mimic these styles.

Find a style you would like to impersonate and let the sky be the limit.  I recently was challenged with needing a headboard for my bed and just didn’t have the funds to purchase what I wanted.  I discovered there was a magnitude of ideas in both books and websites for me to peruse, and I found just the one I wanted.  With the explicit directions that were laid out, I found an easy and inexpensive solution to my need.  In fact, when I finished, it looked like it had just stepped out of a decorating magazine (at least to me).

Clothing is a matter where most people’s tastes and thoughts differ widely.  Some people can’t imagine the thought of putting on something that someone else has worn.  Personally, since all things are washable (or at least most) it only takes a spin through the washing machine and dryer before I feel it’s ok to put on my precious body.  I’ve found that I actually favour a lot of the vintage styles and have great success at finding these things at thrift shops.  In fact, most things that I get the most compliments have come from said shops.

Helping Yourself and Others When Remodeling Your Home

Wanting to do a little remodeling or making some changes to the house?

There’s a great little store called the Re-Use Store and the best thing is that it supports a great charity, Habitat for Humanity.  They carry a lot of leftovers from builders, things that have been removed from remodeling venues, and even some new things from model homes.

I have hopes of doing a little updating to my kitchen in the near future and I have been making a weekly stop at my local Re-Store, looking for glass tiles to use as a back-splash.  I also want to change my counter tops and I’m sure if I’m patient, the right one will appear there.

When I was in there the other day, I heard a whoop from a woman toward the back of the store and she was literally doing a happy dance over a cast iron bathtub she’d found.  “Do you know you just can’t find these anymore,” she squealed, “and just look at what I found.”  The best part – she got it for a song.  Of course, I didn’t stick around to see if she needed a crane to get it out of the store or not but I couldn’t help but smile that something so small had made someone so happy.  Definitely my kind of bargain!

I just recently purchased what will hopefully be my last home.  I had previously owned a large home with my husband but after he passed away, I had to sell that larger home.  It was definitely a blessing in disguise as it was too much house for one person and way too large a yard for me to keep up.  Even though it took a while to sell with the downturn, the wait paid off as a young couple bought it.  It is just perfect for them and their growing family.  I can now know that it’s being used for the reason it was built.

There wasn’t a lot to be done in my new home, but there are still more rooms to decorate than I had in some of the smaller apartments I lived in before being able to purchase.  I’m having a lot of fun right now finding items to project my personality and not spending a lot while finding it.

All in all, there a whole slew of ways to incorporate a frugal lifestyle into your own life.  These are just a few of the ideas that I have used to be less wasteful with money.  I don’t feel as if I’m a spendthrift and no one could ever accuse me of being a scrooge.

I love sharing things with others too much to ever be accused of that trait.  But I do take great pride of being able to live within my means and even have a little leftover at the end of the month to put aside for a rainy day or even a possible early retirement.

I don’t know about you, but I don’t want to work for the rest of my life because I have to.  I’d rather have the opportunity to work because I want to and do the things that bring me pleasure.

17 thoughts on “Frugal Is As Frugal Does”