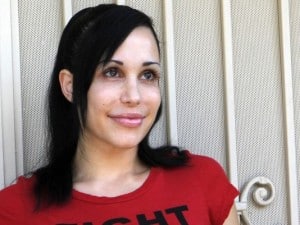 If there’s any one public figure that can drive me totally crazy, it’s Nadya Suleman, the woman otherwise known as Octomom. This is the lady who chose to have six kids through in-vitro fertilization. Fine, you say. Not so bad — plenty of people do this. Sure…but do they choose to have eight more, without a steady income or partner to help share the load?

Now that her octuplets are three-plus, Octomom’s advancing out of toilet training and into a whole new period in life. A new house, career…kindergarten! Thanks to her sterling example, I’ve learned all sorts of interesting lessons:

Are the house payments made, the kids fed and cared for? Only then should you spend hundreds of dollars for luxuries like Brazilian blowouts. Otherwise, you get to meet with Suze Orman, admit you’re broke and be publicly humiliated on TV.

Say Anything You Want About Your Kids. They’ll Never Hear About It

Do it in as public a venue as possible. They won’t mind hearing you say, “I hate babies, they disgust me…My older six are animals, getting more and more out of control, because I have no time to properly discipline them.” If the kids do figure it out, deny, deny, deny. Even if it’s your taped voice making the comments, who should they believe: some stranger or you, their mom? They’ll feel better when you emphasize your devotion: “Obviously, I love them – but I absolutely wish I had not had them.”

If you have free childcare offered by qualified helpers, for example, don’t throw a temper tantrum and fire them, just because they thought your house should be cleaner. (Unless you have a backup plan, that is, or income to pay for that help yourself.)

Another issue: welfare. It’s helped lots of people get back on their feet…and that’s fine. But spending big bucks for personal hygiene while you’re getting public assistance? (See the earlier comment on Brazilian blowouts – a hair styling procedure, by the way) Probably not a good idea, especially when the taxpayers find out about it.

If You Have To, Ask Your Family For Aid

Be grateful for it. Acknowledge it…and of course, pay it back quickly. You wouldn’t want your parents to have to go into foreclosure, as well, because of your own actions, after all.

More Than One Source Of Income Pays When Money Is Short

Nadya’s house, after she stopped making payments for some months, was foreclosed on.  Now she’s asking fans to give $150,000, so she can buy a house for the kids.  People are actually contributing.

From the first, Suleman insisted that she wouldn’t take welfare. (She did.) Then she said she would never do a reality show. Oops, that’s next — but it’s not a reality show. It’s “documentaries on the lives of my children.” Fortunately, some of the money is specifically earmarked for the kids. (You didn’t forget them in all this, did you?)

What’s next for this paragon of inspiration? Well, an advice show, to pass on the wisdom of her parenting skills. (After all, the kids were such angels on their Today Show appearance.) Continuing her spate of television appearances on various programs like Dr. Phil, Oprah and Dr. Drew. And of course, the reality series. I, for one, am looking forward to it.