Home | Making A Smarter Choice By Not Buying A Hybrid Car 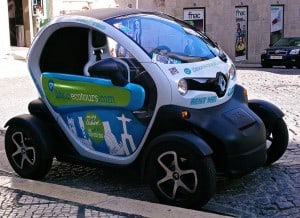 When gas prices were high, owning a hybrid car was all the rage. After all, who doesn’t want to slash their gas bill virtually in half? The problem with hybrids though was the car manufacturers charged a premium for them. This lead to many people spending more money in the long run for a hybrid for the short term gas savings.

I wrote about this around a year ago. Too many people were looking at the money they would save on gas as the reason to by a hybrid. They never took into account the overall cost of the car to realize that in the long run, they would almost never break even financially. (I realize there are another factors at play too, such as being environmentally friendly, but I am talking strictly numbers here.)

As the years have passed, the government has increased fuel efficiency standards for all cars. During this time as well, the US started producing its own oil. We are now starting to see the effects of these two initiatives in lower gas prices. The supply is at an all-time high and the demand, while still there, is not as great as it once was.

So does a hybrid car still make sense? If you are looking to save money, I would say no. In fact, there are a handful of low priced cars that get great gas mileage.

Here is a listing of a handful of these cars. I list the car, followed by its price and then MPG. Note that the price is just for the standard model, and the price will be higher if you add on larger wheels, a sunroof, navigation, etc. 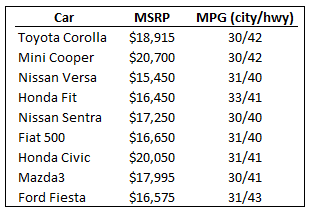 On the surface this looks nice, but is it really? The difference is about $500 a year and over 10 years (the average age of cars on the road) that comes to about $5,000. With the purchase price of the two cars taken into account, it is virtually a break even scenario. So while you do save $500 on gas costs, you are in the same financial spot in 10 years because you paid $5,000 more for the Prius. In fact, if you took a loan out, you probably end up paying more for the Prius because you paid more interest on a higher loan amount.

What Is The Point of All This?

Don’t just look at one thing when deciding if it is a good use of your money. Take all factors into account. Saving money is great, but if that savings costs you more in the long run, then you really aren’t saving any money are you?

If you find the information I provide valuable, please share it through whatever social media platforms you can. I fully believe in paying it forward and hope that as you learn, you can teach others too.
2shares