Home | Raising Chickens Update: Is It Worth It? 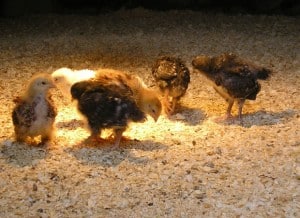 Some months ago, I mentioned raising chickens on Penny Thots. Since then, we’re going into our second year of keeping chickens. We currently have 15 — eight laying hens, and seven babies, nearly grown, who are supposed to begin laying shortly. We currently keep them in two coops at night, with plenty of space to roam in our fenced yard during the day. We’ve learned a lot, including these gems:

Chickens love to eat — they’ll stuff themselves silly, if you let them. One of our cousins couldn’t figure out why his chickens laid down to eat…turns out they were so fat, they couldn’t stand up for any length of time! Our chickens will eat anytime, anywhere, and as much as we let them.

Molting, the nasty secret of chickendom, kicks in during spring or summer, and can last for weeks. During that period, the chickens lose some of their feathers, and cut way back on laying — or not at all. Which means you’re feeding them (see above), but nothing much is happening.

They Can Be Mean

Not just to each other, but to you. If they don’t want to give up their eggs (who would…it’s their kids), they won’t hesitate to peck you. If you’re firm and reach in, anyways, it’s generally ok — but not fun. They’ll swarm around you and trip you. They’ve even chased our dog, hoping to grab his bone. They don’t show much affection or gratitude. They push and shove each other around.

Chickens would make great terrorists…they just don’t care. If they were much larger, we’d be in big trouble.

Bad Things Can Happen Quickly — In Just A Night

You may lose a chick to cold, heat exhaustion…or just being sat on and squashed by her fellow chicks. (In fact, you’re told to plan for losing at least one.)

Or a fox may decide to stop by for the buffet.

In that case, you can lose months of feeding and care — and income — in just a minute or two.

Chickens Are Not Always The Most Accommodating Creatures

When they want greens, they’ll get them — even if it means your perennials or vegetable garden. (We finally had to grow our vegetables in raised bed boxes, and net them. Otherwise, we would have had no beans, zucchini or squash.)

And they don’t care if it’s on your concrete walk, instead of the yard, where it could be doing some good.

And on the plus side:

That means lots of great compost for your garden!

They’ll Eat Any Leftovers You’ve Got

No more throwing away spoiled vegetables, or the casserole you just can’t stomach for the umpteenth time. They’ll eat it – and give you eggs.

If you just keep hens, you’ll have some occasional announcements — but by and large, they just cluck quietly.

Like the poop business, this fault of chickens is also their strength. They may devote more time than you’d like to roosting on top of the coop, instead of in it. They may ferret out holes in the fence, or figure out where the feed is kept, and help themselves.

But they’ll also hide in the trees and bushes when a predator comes, keep themselves clean with regular dust baths, and be surprisingly easy to care for, as long as you’ve got feed, water and a warm, well-ventilated place to stay.

They’ll Keep Each Other Warm, When It Gets Cold

We put in a heat lamp when it gets chilly, but have heard of others who just put in a regular lightbulb. They seem to enjoy the warmth, but it’s certainly not critical. And that’s at 6250 ft altitude, where we get regular snow and storms. They don’t even bother to come in, when it’s raining — the chance to snack on worms is just too tempting.

They Pay For Themselves

We’ve had nine chickens for more than a year. (Well, eight now– Mrs. Broody wouldn’t get out of the nest long enough for the others to use it. And then she started eating eggs — the big no-no in chickendom.)  From those chickies, we’ve been able to sell at least 1 1/2 dozen eggs a week to customers — 3 dozen every other week. In our area, organic free-range eggs are at least $5-7 a dozen. We charge $3.50, and have people lining up for when the babies begin producing eggs (sometime in the fall). It doesn’t sound like a lot, but it’s enough to pay their feed bill every month. Plus we have eggs for using ourselves, and giving to neighbors. (That is, when they’re not molting.)

Would we get chickens again? Yes, I think so — but we’d do some things differently. For one, we’d build a chickenyard much sooner. (I do want a vegetable garden again!) For another, we’d set up automatic waterers and feeders, instead of trudging out in all kinds of weather to feed them.

And watching a batch of clucking birds, feathers shining as they scratch in the warm dirt, while you eat firm, fresh eggs for breakfast…is a real pleasure.